After 8 years of existing in the Scottish reality, Bestial Invasion Records has been recently moved to Sweden. 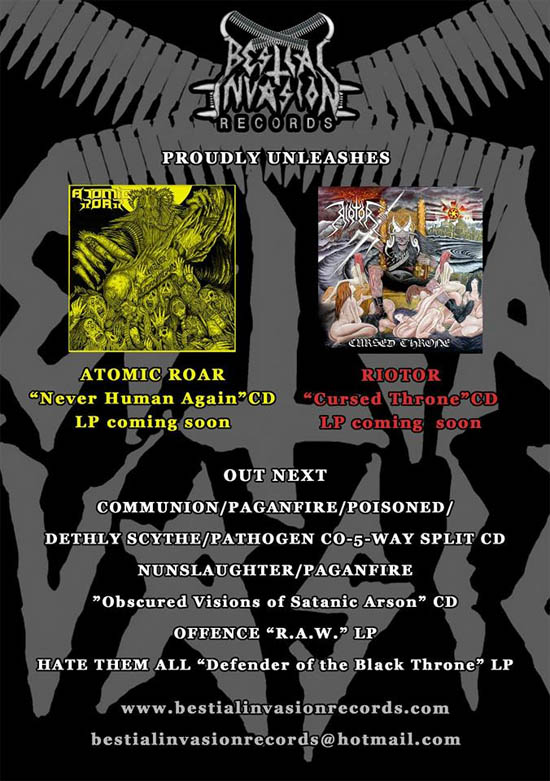 New releases coming out in June 2016

"Sabbatical Vermin Born - The Witchhammer of the Power Elitist" CD

BIR 028 A TRIBUTE TO GEHENNAH

After 3 days (years) in hell it's time for a bestial resurrection of the only UG Metal label based in the ancient Caledonia. The return (of darkness and evil) is blackmarked with 4 new CD releases. Expect more pearls of the Underground Metal in the coming months, years... The site you're just visiting is an embryonic stage of your future favourite webshop and the label's website in one. Hail Metal! Hail Primordial Darkness!

Bestial Invasion Records is back to bring you more and more of the hellish old school inspired Metal! The resurrection of the label based in the Scottish Highlands is being witnessed by one of the Bestial Invasion Records' adversaries, Polish Punkcharged Blackmetallers - HATE THEM ALL. Their debut album "Last Feast with the Beast" is a catchy but still extreme and raw Black / Death / Thrash Metal set enchanted in 12 songs.

"Last Feast with the Beast" CD

Since 2003 PAGANFIRE made their name in the world Underground with their extensive list of demos and splits. The debut PAGANFIRE CD is uncompromising, unpolished and unholy Thrash Metal at its best!

A legend of the Polish Death Metal Underground TRAUMA on a shared disc with the upcoming force OFFENCE. The CD contains video clips of both bands.

Black thrashing madness captured live on EMPHERIS gig in Warsaw while sharing a stage with ROTTING CHRIST and VARATHRON. The CD also celebrates the 29th issue of Necroscope zine..